This is a featured article, which means it has been identified as one of the best articles produced by the DuckmanWiki community. If you see a way this page can be updated or improved without compromising previous work, please feel free to contribute.

Bernice Florence Hufnagel (voiced by Nancy Travis): Duckman's voluptuously buxom and tomboyishly beautiful sister-in-law; the identical triplet of Beatrice and Beverly. She is a fanatic fitness buff and hates Duckman with a passion, and often mocks him with her signature cackling laugh. Though she loathes and reviles their father, Bernice is very loving to her nephews and is considered to be their primary caretaker. Despite this, Duckman views her as an abrasive, domineering, self-righteous shrew who constantly tries to control his life. Despite being physically identical to his wife, Duckman harbors no physical attraction to her. In fact, when she ordered him to lotion her back, he put a glove on his hand and expressed disgust. However, they once engaged in sex while intoxicated. She eventually was appointed as a congresswoman.

On the Duckman DVD collection, her bio was given as the following;

Bernice moved in with Duckman to help raise his children after Beatrice's death, as Beatrice's will granted her joint custody of the children (unless she gets married) and the deed to the family's house. She would appear to have nothing but contempt for Duckman, a sentiment he very much returns. She has no patience for his irresponsibility and sexual deviance. When Bernice moved in she kicked Duckman out of the master bedroom he had shared with Beatrice and took it over herself. She constantly tells him he is a bad role model and a bad father to his children. She is consistently disrespectful and belittling towards him, something she encourages the children to do as well. Bernice did not seem to lower Ajax's opinion of Duckman, but it's hinted that her influence greatly devalued Charles' and Mambo's view of their father. Despite all of this, she does seem to have some love for Duckman deep down. Although her approach is often cruel, and can even be abusive, many of the things she wants from Duckman are for his own benefit, such as spending more time with his children and getting him to quit smoking.

Not much is known about their relationship before she moved in, but it was probably similar. One small tidbit of information we get about their prior relationship was that they both attended a party once, where Duckman accidentally kissed her thinking she was Beatrice. Bernice slapped him for this, but later admitted that it was an honest mistake.

In It's the Thing of the Principal, while posing as husband and wife in order to save Ajax from becoming a child groom, they get drunk in the hotel room and end up sleeping together. The next morning they are both disgusted by this revelation and try to deny it.

Sperms of Endearment reveals that Bernice and Duckman's mutual hatred for each other is so great that it influences their genetics, and are utterly incompatible with each other to the point that it is literally impossible for them to conceive a child together (a microscope close-up actually shows Bernice's egg and Duckman's sperm attacking each other).

Bernice's nephew. Bernice is very protective of Ajax, even more so then with Charles and Mambo, because Ajax is less capable of doing things on his own. She usually speaks to him in a very soft tone of voice and often refers to him as "dear."

Bernice's youngest nephews. She is loving and protecting of them, but does not dote on them the way she does with Ajax, probably because she knows they are more independent. She often pressures Duckman not to miss events that are important to the twins, such as birthdays and tuba recitals. She worries greatly about the example being set for them by Duckman, particularly his sexual depravity and his smoking. When Bernice caught Mambo smoking a cigarette outside the house, she fell to her knees screaming uncontrollably. Despite all this, Bernice herself is not always the best example. She teaches them to have very little respect for their father, and once told them she was sorry they had to be born male.

King Chicken and Bernice's ongoing flirtation first began in the episode Ride the High School. When Bernice, Duckman and Cornfed go to rescue Ajax from his clutches, he traps them in a cage. Bernice uses King Chicken's attraction to her to trick him into letting them go, but later does really get turned on from his description of corporal punishment. Later on in the series when King Chicken would disguise himself as various people as part of his plans to isolate Duckman, he always flirted with Bernice, who always found herself attracted to him, even when disguised as an attractive woman. In Cocktails for Four they have sex in his kitchen, in clear ear-shot of his wife and Duckman in the dining room. In this episode it's also established that they've been having an ongoing affair, they are first mentioned to have engaged in sex in Inherit the Dope Trial.

Not much is known about Bernice's relationship with her twin sister Beatrice before her death. It is obvious that she loved her very much, as like the rest of the family she never speaks ill of her. She keeps a framed picture of herself with Beatrice on her wedding day (with Duckman's face torn out) on her dresser. Beatrice obviously trusted Bernice very much, because she left her children to the joint custody of Bernice and Duckman in her will, and had the deed to the house transferred to Bernice's name.

In spite of her beauty, Bernice is usually portrayed as a very desperate woman, with very few dates. Despite her mockery of Duckman, she is far less lucky in love than him, despite her rather attractive physique and curves. She seems to be desperate for marriage in some episodes, mainly so that she can force Duckman out of his house, and because of her loneliness. In American Dicks she flaunts herself in the reality TV show hoping to find a husband. At the end of the episode she has a date with the camera man, but Duckman punches him out. She nearly married a manipulative millionaire named Baron Von Dillweed, out of desperation. In Forbidden Fruit she finds herself attracted to the boys' female tutor, who turns out to be King Chicken. She is relieved when this is revealed because she thought she may be a lesbian. She was attracted to Angela after her makeover, along with Charles and Mambo, however.

She had a one night stand with Cornfed in Pig Amok, but only did so to help save his life, but nonetheless considers him a good friend.

When she was fourteen years old, she was involved in an inappropriate relationship with her tennis coach.

Bernice can usually be seen working out by lifting weights, doing chin ups, sit ups or going to the gym. She also plays volleyball and played tennis as a teenager. She will often treat the household chores like sports as well, such as attaching a scrub brush to a shoe and using it like a skate, or a contraption with brooms on the wheels of a unicycle. She was also employed by a Mexican vacation resort as an aerobics instructor.

Bernice is an outspoken feminist and has been involved in activism many times throughout the course of the series. In Forbidden Fruit she was chairwoman of the group Womyn Against Duckman, she attended a gender equality summit in Bonfire of the Panties and she was a key member in the formation of the block association. In A Star is Abhorred she is appointed to congress, a job she keeps until the end of the series.

Bernice enjoys singing karaoke, something Duckman frequently attempts to prevent her from doing in public. In A Star is Abhorred, she became a famous singer with a large following of angry, put-upon women. However she gave this up when she realized it was causing her to drink constantly and neglect her nephews.

Despite her brash demeanor, Bernice is extremely good with kids. Children are the only people she can be tender and gentle towards. Since the death of her sister a year and a half before the start of the series, Bernice has been raising her three nephews. A job she not only takes very seriously, but finds fulfilling. In Sperms of Endearment she longs to have a child of her own but has never been able to find a man. As a last attempt she gets herself inseminated at a sperm bank by what turns out to be Duckman's DNA. The insemination doesn't take however and she becomes depressed, feeling as though she'll never have a child of her own.

We have a collection of quotes by Bernice.

Originally in the comic strips Beatrice was still alive and Bernice as a character didn't exist. During development of the show Jeff Reno and Ron Osborn suggested having Duckman be a widower who lives with his sister-in-law rather then his wife. The rational behind this was so that Duckman could flirt with other women without it coming off as too cruel and to create a more interesting dynamic between the male and female lead. Bernice was built as a character from the ground up, although she did inherit her fitness obsession and outfit from the comic strip version of Beatrice and those things were dropped from the shows version of Beatrice. Part of the concept behind Bernice's character was to make her a "classic harpy."

Interestingly in the comics that came out later, based on the TV show, Bernice's character design is used for both Bernice and Beatrice.

Episodes where Bernice has no speaking role 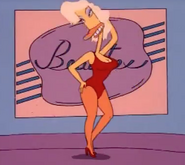 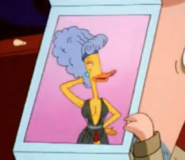 Bernice in Duckman: The Graphic Adventures of a Private Dick 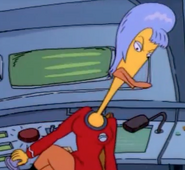 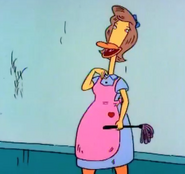 In the perfect utopia, as a housewife 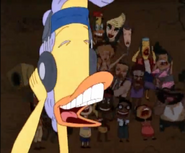 Add a photo to this gallery
Retrieved from "https://duckman.fandom.com/wiki/Bernice?oldid=7636"
Community content is available under CC-BY-SA unless otherwise noted.