Charles and Mambo Duckman are two of the main characters in Duckman: Private Dick/Family Man. They are Duckman's second-born children who takes after their father's snarky personality, but definitely not his IQ.

Charles and Mambo are child geniuses whose heads share a body. They view Duckman as a subpar and inadequate father (both very true assessments), but love him anyhow.

Duckman can rarely seem to remember Mambo's name and has called him everything from "La Bamba," "Mandingo," and "Simba," to "Gumbel" to simply "Charles' brother."

When arguing, they have been known to head-butt one another, or strangle each other. In later episodes, occasionally one will try to commandeer their shared body, interestingly Charles is able to succeed in doing so multiple times, but Mambo only can on rare occasion.

Like Ajax, Charles and Mambo don't have any friends, and are seen to be mocked at school for their nerdy traits. In The Girls of Route Canal, Charles and Mambo try to speak to their crush, who was another double-headed oddity. They were pushed aside by the McGaragle Twins, who seemed to be dating them by force.

Despite their distaste for Duckman's personality, the two actually share several traits with him, such as: their talent for creatively insulting people, their short temper, Mambo's smoking, lack of popularity and friends, physical weakness, large egos, cantankerous attitudes, and reluctances to admit to being wrong.

In general, Mambo is more easily agitated and the more cynical of the two, where as Charles is gentler and more content.

In the comics, Mambo would sometimes correct Charles when he spouted misinformation, such as misattributed quotes.

Mambo also seems to be slightly harsher towards Duckman; this may have something to do with Duckman always screwing up his name but remembering Charles' just fine.

In terms of beliefs, Mambo puts the good of society before individuals, where as Charles believes that no opportunity is worth hurting people for. In his words; "It's wrong to abandon the tree for the forest."

On the Duckman DVD featurette "What the Hell are you Starin' At?", Elizabeth Daily described Mambo as "Dry, cutting [and] crass…" and as "Duckman but in boy form." She also hypothesized that Mambo was not as smart as Charles. Pat Musick, the voice of Charles, described him as the more reasonable and sensible of the two and agreed that he was the smarter one. She also stated she figured he did not like the idea "...That he would be stuck with Mambo the rest of his life."

On the Duckman DVD collection, their bio is given as the following:

On Klasky Csupo's flash website, Charles and Mambo's bio is given as the following;

Charles and Mambo are Duckman's younger sons... er, son. You see, they have the same body but have two heads that think very differently.

In fact, both heads are often arguing with each other. Talk about a challenge in parenting... can you imagine what Duckman would have to do if he had to punish Charles for acting up when Mambo didn't have any part in it?

Although Charles and Mambo may seem physically odd, they often are more level headed than their single craniumed father.

Charles and Mambo are conjoined twins whose heads share one body. Their body is normal and just slightly wider than average.

They also have separate bladders, as demonstrated in Bev Takes a Holiday and In the Nam of the Father. In Kidney, Popsicle, and Nuts, Dr. Ben Stein states that the two share only one kidney between them.

They also share connected lungs, as shown in You've Come a Wrong Way, Baby. When Mambo smokes a cigarette, the smoke comes out of Charles' mouth.

Each twin controls the arm and leg on their side, but one might occasionally be able to take over both sides, typically Charles.

A sign on their door reads "Do not enter, experiments in progress".

Science is Charles and Mambo's favorite subject in school. They regularly participate in the science fair (and win each one), as well as performing multiple experiments and projects at home for fun.

For example, in T.V. or Not to Be, they successfully created a formula that could incorporate all necessary nutrition for a child into a single chocolate ho-ho.

In Gripes of Wrath, they were shown to be very fascinated with super-computers, because they were devoid of human error. They later concluded, however, that imperfection is a necessary part of society, and that perfection in it of itself can be a flaw.

In The Mallardian Candidate, impressively, one of their science fair projects involved the successful re-animation of dead tissue.

In Ajax and Ajaxer, Charles and Mambo were seen using VRML-enhanced software to make a virtual reality simulation of their own room.

Charles and Mambo play a modified tuba with two mouthpieces.

In The Once and Future Duck, they produce a tuba tribute to dead rock stars who's names begin with "J," including a tuba rendition of Jimi Hendrix's Foxy Lady.

Duckman regularly doesn't attend any of their tuba recitals.

In American Dicks, Duckman was on a reality show that delved into the professions of detective work, and the Duckman agency was chosen for their 100th episode.

This caused him to miss their recital on Friday, even though Duckman's motivation for solving this particular case on TV meant that "It'll make [him] somebody. [His] kids will be able to be proud of [him]."

Two instruments that Duckman mistook them for playing were the piano, and the piccolo.

Charles and Mambo see their father as an unfit role model, and are not shy about telling him so. The two also find his antics, especially his more sexually devious ones, embarrassing and shameful.

Mambo says he wishes Duckman would reward his intelligence and Charles wants him to nurture his sensitivity.

On a typical basis, both twins are shown to be cold and apathetic of their father, often siding against him, disregarding his well-being or health, and abandoning him to his fate and/or misfortune, even going as far as deliberately skipping his birthday.

They do love him though, but are much less starved for affection than their older brother Ajax.

In Gripes of Wrath, they tell him they have learned the most perfect parent is an imperfect parent as it creates the drive for improvement.

After hearing the story of how he and their mother met, they hug their father and tell him they love him.

Later, Charles tells Amanda and Alexis, "when it comes to love, he's the smartest man we know."

In Sperms of Endearment, Mambo asks Duckman to be "the same caring, loving father to Aunt Bernice's baby as [he's] been to [them]." Mambo immediately follows this by warning to Charles "If you tell anyone I said that, I wont use deodorant on my side for a month."

Not much is known about Charles and Mambo's relationship with their mother, but in the Girls of Route Canal, they describe her as wonderful and the most incredible woman ever.

There's no doubt that Charles and Mambo love their aunt Bernice. The two have fully accepted her as a substitute mother figure.

Bernice's opinion of Duckman also has a clear impact on the two as they have been taught by her to have very little respect for their father and to ridicule him whenever the opportunity arises.

Charles' and Mambo's older brother. They get along well for the most part, but the two have been known to tease him for his stupidity, and in American Dicks, Ajax teases them back for having two heads.

In The One With Lisa Kudrow in a Small Role, Charles and Mambo are shown to know a great deal about their brother and are aware of every place Ajax normally likes to go.

Charles and Mambo both refer to Cornfed as "Uncle Corny" or "Uncle Cornfed." They idolize him because of his vast amount of experiences, skills, and abilities.

Cornfed in return is usually very loving, protective, and respectful towards the boys.

In contrast to how Bernice's influence sprouted their distaste towards their father, Cornfed serves to remind them that they should still show respect towards Duckman.

In A Civil War, Charles and Mambo, along with their sibling Ajax, are seen praising Cornfed for breaking apart an angry mob that was started by Duckman's offensive icebreakers. While the three were very much making fun of Duckman, Cornfed politely put a stop to their mockery.

In Bonfire of the Panties, Cornfed does take advantage of their trust in him, by convincing them to create an aphrodisiac for Duckman, something they felt was morally wrong until he talked them into it.

This led Bernice to blame the entire situation on Cornfed as he was the adult and should have known better.

They did not have much personality outside of being irritating and angry.

They were much more immature in this iteration, seeing as how they are seen sobbing over having to vacuum Grandma-ma.

On the last page of the comic, they are seen run over by Duckman's car. While it wasn't at all fatal, Duckman screams at them "What the!? How many times have I told you two fartballs not to play in the driveway- Now I'm gonna be late for work!!"

During development of the pilot they were made more deadpan and given several other traits, including being child geniuses, and their search for a male role model.

Their original character description is as follows:

The twins Charles and Mambo: These two whiners are best described as other-worldly.

Their character design was also changed. Originally the twins were lankier with larger eyes, longer bills, spiky hair, sandals, and no jacket.

We have a collection of quotes by Charles and Mambo.

Episodes where Charles and Mambo have no speaking role

Charles and Mambo as Maggie Simpson

Charles and Mambo in class

Thinking they're about to die 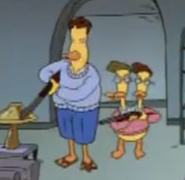 In the opening credits 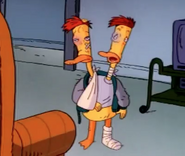 Trying to tell Duckman they were beaten up at school, but he thinks they're wearing pastel eye shadows 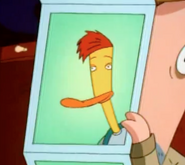 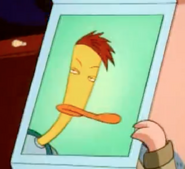 His photo of Mambo

Charles and Mambo in Duckman: The Graphic Adventures of a Private Dick

The twins as Charlesov and Sulu Mambo

In the perfect utopia, respecting Duckman (note their Stepford-esque grins). 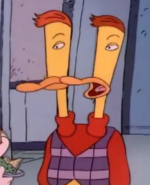 Dressed up formally for the block association meeting. 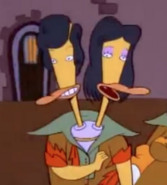 Charles and Mambo as Donny and Marie Osmond

Add a photo to this gallery
Retrieved from "https://duckman.fandom.com/wiki/Charles_and_Mambo_Duckman?oldid=8259"
Community content is available under CC-BY-SA unless otherwise noted.