Coolio Runnings is the second episode of the final season.

With the Father & Son Games coming up, Duckman looks for an alternative to competing with Ajax, as he lacks any athletic ability. He spots a more than adequate replacement in recording artist Coolio, who's returned to school to replace his high school diploma. Coolio agrees to be adopted by Duckman at first, but backs out of competing when he sees how much the neglect is hurting Ajax. Duckman ultimately decides to compete with Ajax, and even though they don't win, it has made Duckman and Ajax's bond stronger. 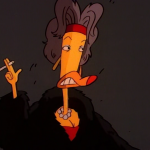