An apartment in Los Angeles, CA

Four Weddings Inconceivable
Willibald Feivel Cornfed, or simply just Cornfed, is one of the main characters of Duckman: Private Dick/Family Man. He is Duckman's endlessly loyal work partner, and his only friend.

Cornfed is Duckman's Joe Friday-esque business partner and best friend; loosely based on the character "Greggery Peccary" as portrayed by Frank Zappa in a handful of songs.

Affable, studious, as well as morally and sexually scrupulous, Cornfed is an amazingly talented pig and has specialist knowledge from practically every walk of life. He knows dozens of martial arts and claims to know "200 ways to kill a man".

For roughly the first half of the show's run, Cornfed is a virgin, which contrasts to his popularity among women and earns Duckman's mockery. He loses his virginity to Bernice in order to avoid succumbing to a family genetic disease.

Most of the cases solved by the Duckman Detective Agency are solved by Cornfed, with Duckman usually hurting the case rather than helping. He has had numerous former occupations, such as mailman, truck driver, waiter, plumber, clerk for a Supreme Court justice, member of the Irish Parliament and keyboard player for A Flock of Seagulls.

He has a medical degree from a Peruvian medical school, and was also educated in air conditioner and VCR repair. He is also a Vietnam veteran; this was revealed when a young man claimed to be his son from the War (he was really a con man).

In season 4, it was revealed that Cornfed is a Lieutenant Colonel in the National Guard. Cornfed is the kind of detective and righteous family man that is ideal in contrast to Duckman's obliviousness and crass failure in both arenas (as opposed to others). In fact, he is seen bonding with Duckman's sons miles better than Duckman does.

In the Duckman DVD collection, Cornfed's character bio is as follows;

On Klasky Csupo's flash website, Cornfed's bio is given as the following;

Cornfed is a pig who talks like Sgt. Friday on Dragnet, knows dozens of ancient martial arts, and has never gone all the way with a woman. Without him, Duckman would be completely lost. Cornfed deals with all of the elements of the detective agency that Duckman cannot... like getting the clients, paying the bills and solving the cases. Cornfed has also helped Duckman numerous times with his personal life, and has often offered him advice on how to keep his family together and how to avoid the various villains, scoundrels and old ladies who want to see him dead. Cornfed might look mild-mannered, but in his chest beats the heart of a super pig.

The two first met in high school in the 1970's and parted ways after graduation, leading very different lives. They crossed paths again shortly after the death of Beatrice's first husband Richard. She'd been having an affair with Duckman prior to this, and after the funeral Duckman searched the world for her (despite her being at her house.)

While in a New York airport, he came across Cornfed who was a baggage handler at the time. He suggested looking for her at her house and promptly drove Duckman there, as he was trucking there for his other job anyways.

They met for the third time shortly after Duckman had received his detectives license, and Cornfed was nearly done getting his. Cornfed was working a night shift at a bakery Duckman was in, when a crazed gunman came in and attempted to shoot him, Cornfed took the bullet for him. Immediately after as Duckman called 911, he saved him from choking and then from being shot, taking two bullets for him. At this time Duckman invites him to be his partner.

Duckman and Cornfed have a strong and solid friendship, as shown in numerous episodes. Duckman does tend to take advantage of Cornfed and in turn Cornfed looks down on Duckman for both his lack of skills and dubious morality. Duckman has been known to betray Cornfed on several occasions, but Cornfed is always loyal to Duckman. Even when it seems he has betrayed Duckman, it is always part of a clever rouse.

Charles and Mambo more often then not refer to Cornfed as "Uncle Cornfed" or "Uncle Corny." Because of their general distaste for Duckman's behavior, they instead turn to Cornfed as their male role model, idolizing his many skills, knowledge and kindness to those around him.

Cornfed in turn see's them as surrogate nephews, and like Duckman, is very protective of them. More often than not, Cornfed even seems to be able get along better with Duckman's children than Duckman himself.

In Bonfire of the Panties, Cornfed, Charles and Mambo put together an aphrodisiac for their father to use. Duckman had gotten very hard-up by not getting any action as of late, making him unbearably irritable.

Ajax doesn't often refer to Cornfed as his uncle and unlike Charles and Mambo, Ajax has no problem looking up to Duckman. He does however seem to think of Cornfed as an unofficial member of the family. Cornfed thinks of Ajax as a surrogate nephew just like he does Charles and Mambo, and has the same protective instincts over him.

The relationship between Ajax and Cornfed is developed further in Ajax and Ajaxer, where Cornfed's intellect is wiped out by an experimental elixir. Cornfed's IQ is equal to that of Ajax's in this episode, and the two get along almost immediately. Ajax gained a friend at last.

But the serum would eventually wore off, and Cornfed was becoming smart again, much to Ajax's distress. To make Ajax feel better, Cornfed took him to Merv Griffin; Ajax's idol.

Despite the fact that Cornfed has a talent for attracting many women and has fallen in love many times, he remained a virgin throughout most of the series mainly due to his own insecurities and nervousness. Some of the women Cornfed has been involved with have been;

Cornfed took a quick liking to Beverly. in The Tami Show, his face turns red and he starts getting more nervous when she's near.

Beverly starts to return his feelings when she gets to know who he is more during the events of Westward, No!, much to Duckman's dismay. Cornfed takes her to meet her Aunt Jane who owns a catfish farm in Louisiana, and Duckman forcibly joins them in attempt to put a wrench into the works.

They find that her farm is experiencing financial difficulties. Her hands are fixing to drive the herd to Texas, and it's her last chance to save the ranch where her father and grandfather lived and died. Big Jack McBastard found that Jane had to fire the hands because of assault, so Cornfed, Beverly and of course, Duckman had to drive the catfish to Texas themselves. Otherwise, Jane would lose everything.

All the while, Beverly seems to get increasingly impressed with what Cornfed is doing for his Aunt Jane, and says a girl could get used to a dependable guy like him. But Cornfed notes that he's loyal to Duckman, however the two agree to continue to "fool around" in secret.

Cornfed is a master of all trades, with a wide range of careers and hobbies under his belt, he is an expert in all of them. These include;

Cornfed's role was expanded for the series. In the original comic strips he was not featured in many stories.

He also did not seem to have a relationship with Duckman outside of work and he never interacted with his family. Many of Cornfed's traits, such as his endless areas of expertise were not present in the comic strips. The relationship between him and Duckman was based on that of a couple of friends of Everett Peck's who owned their own business.

His voice actor, Gregg Berger was in Russia during production of the first season and most of his lines were recorded from there over the phone.

We have a collection of quotes by Cornfed.

Episodes where Cornfed has no speaking role 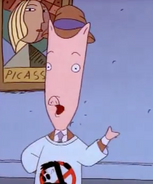 Cornfed undercover as a member of Womyn Against Duckman

Eating nacho's while Duckman is missing. 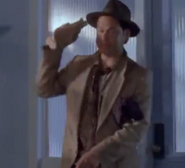 Cornfed in high school in 1976

Cornfed in Duckman: The Graphic Adventures of a Private Dick 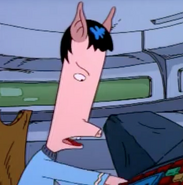 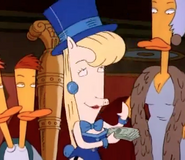 Cornfed undercover as a Vegas Showgirl

Add a photo to this gallery
Retrieved from "https://duckman.fandom.com/wiki/Cornfed_Pig?oldid=8299"
Community content is available under CC-BY-SA unless otherwise noted.