Spoiler Warning: Read at Own Risk

Four Weddings Inconceivable is the series finale of Duckman.

At the wedding of Dr. Ben Stein, a series of emotional epiphanies lead to a not so amazing set of marriage proposals. King Chicken proposes to Bernice, Cornfed proposes to Beverly and Duckman proposes to King Chicken's ex-wife Honey. After many arguments between the principles, Duckman says he will make all the arrangements, thereby letting everyone blame him. Despite his arrangements, the ceremony goes off with the appropriate hitches, except that Duckman finds out something that Cornfed forgot to tell him.

Many fan theories have come up on the internet over the years in an attempt to explain both the cliffhanger and other elements of the episode. For example, many fans see Cornfed keeping such a secret from the Duckman family to be out of character. These are some of the more popular theories

Probably the most popular and easy to explain theory is that this episode is all a dream. This would not only explain why Beatrice would be alive, but also several other things that don't quite add up. For example, Honey and King Chicken saying they were only married for nine years and never had sex, despite having a fifteen year old daughter. Also, King Chicken not knowing about/being disgusted by sex despite being shown having sex throughout the series as well as Honey's abrupt change in personality could all be explained if the episode were a dream.

Heavily connected to the first theory, only here it is speculated that we are still seeing Leonard Nimoy's dreams as we were in the last episode Where No Duckman Has Gone Before.

This theory states that the Beatrice who reveals herself is not Beatrice at all, but an alien impostor with intent to use Duckman in some bigger plot. Additionally, much of the episode may be a simulation run by the aliens, which would explain the character inconsistencies, as well as why many supporting characters in attendance of the wedding are miss-coloured.

Michael Markowitz recently made a tweet that may confirm this theory. He mentions an alien cover up and hints at Dr. Steins bride being involved, perhaps an undercover agent.

This theory explains why Beatrice appears alive, despite the evidence from the rest of the series that she was indeed dead and buried. A Satanic Resurrection cult. This would also explain how Big Jack McBastard was able to come back and why Richard was seen alive and well at a frat party. The theory goes that this cult cannot resurrect bodies, but souls or poltergeists, explaining McBastards recovery after being eaten by vultures and why Beatrice and Richard show no signs of having been dead for years.

The Writers Snorted Coke and Hit Their Keyboards… With Their Heads 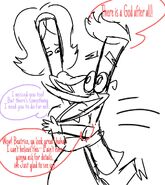 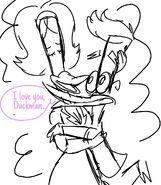 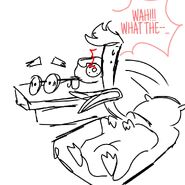 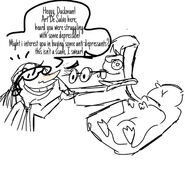 Add a photo to this gallery
Retrieved from "https://duckman.fandom.com/wiki/Four_Weddings_Inconceivable?oldid=7234"
Community content is available under CC-BY-SA unless otherwise noted.