Hamlet 2: This Time It's Personal

Gecko "Sparky" is a recurring character in Duckman: Private Dick/Family Man. He is the pet dog of the Duckman household.

He is rather old and lazy and suffers mistreatment and neglect at the hands of the family. He also seems to have not been housebroken, as he is sometimes seen urinating on the floors in the house.

In Cellar Beware it's revealed that Gecko is actually the neighbors' dog, and his real name is Sparky. Duckman apparently stole the dog, the rest of the family being unaware of this.

Duckman mistreats the dog, kicking him, carrying him around in a tool box rather then a pet carrier, and apparently considers a bowl of water to be a Christmas treat.

According to Duckman in Married Alive, Charles and Mambo once bit the dog, though any recollection from Duckman must be taken with a grain of salt.

There are often a lot of throwaway gags involving Gecko, where he will be seen in a state that he'll never be seen in again.

In The Tami Show, Ajax is seen wanting to keep a random woman as a pet, promising he'll train her and take good care of her, and then the camera pans over to Gecko's skeletal remains.

In The Amazing Colossal Duckman he is shown to have the ability to talk, though this is never shown again and was more or less a throwaway gag.

In Forbidden Fruit he is revealed to be very well trained, doing several even more impressive variations on classic dog tricks, but nobody had ever taken it upon themselves to command anything of him.

On Klasky Csupo's flash website, Gecko's bio is given as the following;

Gecko is Duckman's purple dog. Although this may seem strange in the real world, in a family that has a two headed duck and a patriarch whose best friend is a pig, Gecko is the most normal of the bunch. Like most dogs, Gecko likes to eat, but as far as watch dogs go, is not very good. Still, Duckman prefers his company any day over Aunt Bernice's.

Even in the original comic, Gecko is seen doing something outlandish.

His first appearance in the comic features him playing a round of golf inside the house. Duckman, feeling annoyed at the time, yells at him for holding the club improperly.

Gecko doesn't make that many appearances in the comic, not outside of the introductory page and the aforementioned golf panel. As such, not very much else can be gathered from his conception.

His original character description is as follows:

Dog Gecko Everyone hates this obnoxious gas bag, except the Duckman. He feels this mutt is the best thing to happen to him since toilet seat protectors.

Gecko after using Beautex, about to be killed by King Chicken

Sitting with Charles and Mambo 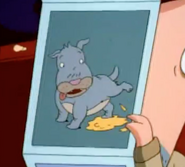