Four Weddings Inconceivable
Grandma-ma/Sophia Longnameovich-Hufnagel is one of the main characters in Duckman: Private Dick/Family Man. She is Duckman's apparently comatose and immensely flatulent mother-in-law.

Grandma-ma sits in the same chair and rarely moves.

She is capable of changing the expression on her face or turning her head, but the rest of her body appears completely immobile.

Grandma-ma communicates through her flatulence, and each expelling mirrors how she's feeling emotionally.

In Aged Heat, she is kidnapped by her doppelgänger Agnes Delrooney, who poses as her for several episodes until her scam is revealed in You've Come a Wrong Way, Baby.

In the episode Crime, Punishment, War, Peace, and the Idiot, it is revealed that she is a Russian immigrant.

She moved to the United States with her husband Trigorin who tricked her into marrying him out of jealousy for her true love Petrov.

Trigorin and Petrov both died from a blimp crash, but she discovered that she had gotten pregnant with triplets by Trigorin.

On Klasky Csupo's flash website, Grandma-ma's bio is given as the following;

Grandma-ma lives in the Duckman household. She sits in the same chair and rarely moves.

She never says a word, but rarely keeps quiet.

How does she do this? Well, she usually lets her flatulence do the talking for her.

Grandma-Ma has a soft spot in her rotund form for her son-in-law, but can only express it in her disgusting bouts of wind-passing.

Grandma-Ma also loves to watch TV, although most of the Duckman family often wonders if she is aware of what she is watching... or whether or not she knows where she is.

During the time that Agnes Delrooney had taken her place, Grandma-ma was accidentally arrested instead. While Agnes was posing as Grandma-ma, Grandma-ma was, most likely having been mistaken for Agnes by the other inmates, treated as a mafia "Godmother" if you will. When Agnes was pardoned by the president for helping bring down an evil tobacco company, Grandma-ma's identity was revealed and she was freed.

Grandma-ma's daughter. Bernice was apparently quite close with her growing up, though she admits that she never told her about her past or Bernice's father. Once Grandma-ma became comatose, Bernice began living with her to take care of her. When Beatrice died and she moved in with Duckman, she brought her mother along, much to the frustration of Duckman. Bernice still adores her mother and is always very concerned with her well being and health. Although she does often relegate the more unsanitary responsibilities to Duckman.

On Beatrice and Duckman's wedding, she told Duckman that she was delighted to have him as a part of the family and that he could finally feel like he belonged somewhere. Although years later we hear her thoughts on him; "I really hate that guy." Duckman sees her as an inconvenience, being comatose, and doesn't like that she lives with him at all.

Her grandsons. They absolutely adore her, despite the fact that they haven't known much of her (or in Charles and Mambo's case, perhaps any) in a conscious state. They are very affectionate towards her, which is an unusual emotion to express for the twins though she seems to be an exception. As she is non-verbal and, as shown in Crime, Punishment, War, Peace and the Idiot, rarely fluid in her thoughts, it isn't really known how she feels towards them.

Not much is really known about Beatrice's relationship with her mother. It doesn't seem like she was as close to her as Bernice, perhaps because she was married (twice) quite young, and Bernice never married at all.

Grandma-ma gave Beverly up at birth, though it is never stated why exactly she did this. It also isn't known whether Grandma-ma is lucid enough to even be aware of who Beverly is, or that she lives with them at all. Beverly expresses a desire to have had a relationship with her mother before her ailment. 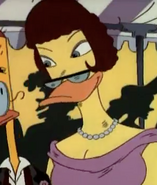 at Duckman and Beatrice's wedding 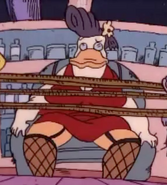